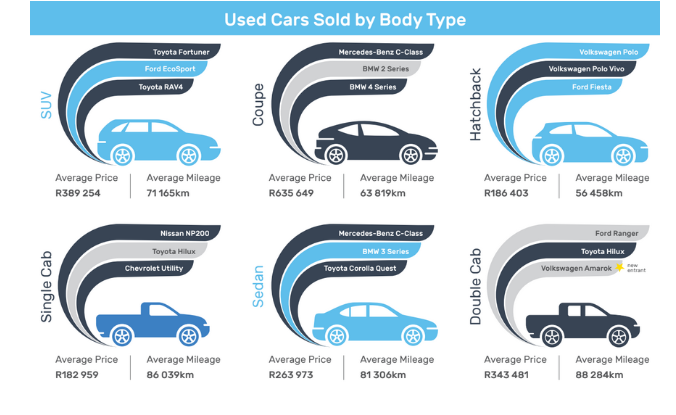 Two factors indicate that the used car market is recovering:

AutoTrader chief executive, George Mienie, said January 2020 was a record breaking month in the history of AutoTrader presence online. “Car dealers listed more cars, and consumers searched for more cars, than ever before,” he said.

Citing the National Association of Automobile Manufacturers of South Africa (Naamsa), Mienie noted that the new car market was -8.1% down in January 2020 (versus January 2019).

According to Mienie, the majority of used car sales in January occurred in Gauteng. “Gauteng accounted for 59% of total sales, with 15% coming from Western Cape and 13% hailing from KwaZulu-Natal,” he said.

The average selling http://www.rustburgpharmacy.com best price for used cars in January was R283,734 – with the average mileage being 73,368 km. The average age of used vehicles sold in January 2020 was five years and four months.

The Volkswagen Polo was the top-selling used car in January 2020. It was followed by the Ford Ranger, Toyota Hilux, Volkswagen Polo Vivo and Mercedes-Benz C-Class, Mienie said.

It was also interesting to see the different shopping preferences in the various provinces. “The Ford Ranger was the top-selling used vehicle in Limpopo, the North West, Eastern Cape, Mpumalanga and Gauteng. The Polo was the most popular used car in the Western Cape, KwaZulu-Natal and the Free State. In the Northern Cape, the Mercedes-Benz C-Class clocked in tops,” said Mienie.